Seen one arch you’ve seen them all? Seen one desert you’ve seen them all? I think not. I have already visited all of the states and I think Utah will end up in my top favorite five states. So far, I have California, Hawaii, Alaska, . . .
I heard my phone beep when I was on a hike. The good news is that I had cell reception. The bad news is that it was FEMA telling me that I shouldn’t be hiking eight miles in 90-degree weather and that I should have put on more sunscreen. That trail was called Devil’s Garden. I can understand why. It kicked my ass. There was a lot of scrambling up, down, and around boulders and “fins.” There were some really scary parts to the hike, including not having enough energy to take a wrong turn and not knowing where the right turn was. Fortunately, there were enough people on the trail to help me along. Hikers tend to be cool like that. The next day, a former park ranger told me that I hiked the loop in the opposite direction from the designed intention.

I almost didn’t go to Dead Horse, which is just a short drive from Moab, Utah. The views of the canyons and the Colorado River were beautiful. I definitely thought that I was looking at The Grand Canyon. Moab is a great place to be based, where you can also visit Arches National Park and Canyonlands National Park. I’m excited to show you those pictures, also. Moab in and of itself is a cute town, but not quiet. There is a a lot of traffic and construction. You don’t have to go far, though, for peace and serenity. Nearby is also a dinosaur park, but don’t waste your money like I did. Grrr.

Not far from the Nevada border and into Utah, I saw a hill named Mormon Peak. It was the first time that I had seen a high Mormon.
The photos below are of Capitol Reef National Park. It’s huge. I was concerned that I wouldn’t get good photos or good hikes, because the first day the air quality was bad from wildfires. In a couple of the photos I captured the park’s smoky look.
The first time I went spelunking I learned: 1) never go alone, 2) tell two people where you’re going and when you expect to return, 3) bring three sources of light, and 4) go in a group of a minimum of four people. These are good rules to follow when exploring outside of a cave, also. What’s worse than following only one rule? Hiking in a gorge or wash with rain clouds above. That was a fast hike and I seemed to be the only one concerned.
You’ll see a photo of petroglyphs, which Indians have been creating for thousands of years. Since they have understood the importance of history, whether or not the truth hurt, I highly doubt any tribe or generation came along and crossed out the images.

It only took me a few days into my long camping trip to fall in love with a park ranger. Ah, men in dirt.
The photos below are of Great Basin National Park, known for its starry sky and Lehman Caves, neither of which I saw much of. The former was muted by a nearly full moon and the other muted by a virus. Grr. I had to watch a video to see inside the cave. Grr.
Hiking 5 1/2 miles up at 10,000 feet kicked my ass. I train at sea level. I train at sea level! I hiked part way with two bad-ass women, about my age, from western Pennsylvania. They served in the military, worked corrections, and patrolled the US-Mexico border, among other achievements. I learned a lot from them.
One of my favorite aspects of traveling is meeting other world travelers, with whom I can relate better than with anyone else. Of course I love meeting the locals, too. There’s nothing like being a guest on other people’s turf and learning their culture and how they overcome challenges. It’s the best way to understand why people are the way they are and of course the best way to learn acceptance, sympathy, and empathy, traits world travelers tend to have.

On September 1 I embarked on a road trip that will take place mostly in the southern half of Utah. I started in Paso Robles, California, and went to Sacramento to visit friends and family. My dinner at Revolution Restaurant in Sacramento was so good that I want to tell you all about it. But, this isn’t a food blog–bo-ring. In Carson City, Nevada, I saw wild horses, which I had heard about but never seen. I was so excited; it was as though I had never seen a horse before. No, I didn’t get a picture. I made my way east on Nevada’s Highway 50–Loneliest Road in America–which is so beautiful. I drove over a hill/mountain pass and then across the basin to the next pass, over and over all the way to Baker, Nevada, by the Utah border. I passed a lot of BLM signs. It’s interesting that Black Lives Matter has the same initials as Bureau of Land Management. On my way to Austin, which is about half-way across Nevada, I stopped to photograph desert graffiti (Fig. 1). I was so hot after spending only a few minutes in the sun that I saw a mirage. Along miles (?) of highway, the rocks spell out the US Constitution’s Preamble—no cancel culture in the Nevada Basin. Scorpions are still patriotic. The rest of the images were taken in or near Austin, including Stokes Castle (Fig. 4), Toquima Cave (Fig. 7-9), and Hickison Summit (Fig. 10-11). In Fig. 7 & 11 you can see petroglyphs/pictographs. While taking Fig. 10 I was thinking: I love having planet Earth all to myself. Where’s my next stop? Stay tuned to find out.

In 2014 I helped a client publish his book called American Covenant Revival. In the copyright section of his book it states:
“All parts of this compilation SHOULD BE reproduced in any effective form as a catalyst to inspire movement for national reawakening of the fundamental principles of the United States of America, to achieve Revitalization, Reformation, Transformation, and an economic True Fair Deal for the General Welfare.“
Considering the nonsense happening in America, this book is more relevant than ever. You decide for yourself. My client and I printed many copies that were to be distributed for free. I haven’t spoken to my client since the project ended and I can’t reach him or a family member. He was old when we worked together, so he may not be living still. The point is that he would definitely be happy that I am sharing his work and encouraging you to read it. I hope you like it and benefit from it. As it is implied above, please feel free to forward the document to others.

Book 1 of 5 for #talkalstome Virtual Book Club for #alsawarenessmonth is “My Guardian Angel Wears Antiperspirant” by Carole Breton and @JeanneBeanMurdock
We will meet virtually to discuss this book and get to know the author on May 7th at 7PM CST
Purchase the book and register here:

From now until the end of May 2020, I am offering a discounted rate for my writing service: $100/hour. Normally, I charge $150/hour, $130/hour for those who live in San Luis Obispo County (CA). Free 30-minute phone consultation. What story do you need to tell? Your story matters.

Today is BeanFit’s 28th anniversary. Happy anniversary to us! In 1992 I started BeanFit Health and Fitness Services, which included writing. I stopped offering health and fitness services in 2014, and BeanFit remained as my brand of books. Thank you for making my career successful and fun.

I now have an Instagram account: jeannebeanmurdock. Follow me! Not in a stalker way. Just a social media way. Also, I am taking a class called Acting for the Camera. Visit my YouTube channel, beanners1, for monologues and other new videos posted. 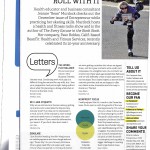 I am Entrepreneur Magazine’s ‘trep of the month–March 2012. Check out page 14.